Golden nuggets of goodness – what’s not to love about Golden Turmeric Bites?  While it’s generally ideal not to snack between meals (so that you are essentially having a mini fast), sometimes a wee snack is called for.  This is a super simple snack full of healthy metabolism-boosting fatty acids (including lauric acid),  they’re grain free, gluten free, paleo friendly and anti-inflammatory.  They’re also quite filling, so a little goes a long way.  We served samples of this up for 200 people at an International Mindd Forum back in 2014 and they’ve been a firm favourite ever since! 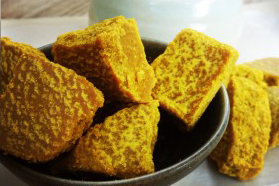 Turmeric (Curcuma longa) is one of the most researched spices on the planet.  To date (September 2017) there are over 2,500 studies on turmeric’s 268 pharmacological actions in 830 diseases. The diseases most studied for the beneficial impact of  turmeric includes cancer (particularly breast, prostate, colorectal and lung),  Alzheimer’s disease, chemically induced liver damage and type 2 diabetes mellitus.

Many of turmeric’s benefits are derived from it’s potent antioxidant and anti-inflammatory effects.  The most widely recognised active constituent in turmeric is called Curcurmin.  Interestingly studies of turmeric with the curcumin removed showed it still exhibits these actions strongly, suggesting there are a range of active compounds within the plant are responsible for it’s beneficial effects.  As always, it’s best using the whole food so all those compounds can work together synergistically.

Turmeric is not the only golden star in this recipe however.  Cinnamon is great for improving insulin sensitivity and both cinnamon and pepper are also great anti-inflammatory and anti-oxidant spices.  Coconut provides lots of beneficial fats to keep us fuller for longer and has anti-microbial properties

If you have a blender that also heats, you can gently heat the ingredients at a low speed, rather than chopping / grating the coconut butter first. This will enable you to blend better. 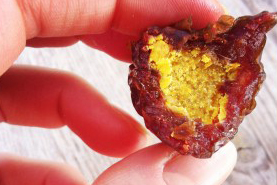 For something extra decadent, you can wrap up your golden turmeric bites in a blanket of date for a sweet treat.  Just go easy on the dates (so have one or two every now and then if you don’t have candida / gut bacteria overgrowth problems) as they are high in sugar.  Natural sugar of course, but still sugar.